You just found this a visual novel I made based on Italo Calvino's if on a Winter's Night a traveler. If you know that book, you might already know the following spoilers: the text will be very meta and probably be interspersed between moments of "you", as a character reading it and short experimental texts in multiple narratives. Eventually I wish to implement a way so you can skip to the chapter you want to, just as in a real book.

1.  An orchestra therapist simulator! Straight ups stealing lucasograssi's original game idea, I wanted to take that idea further by making a game where you as the conductor interview the instruments and find their need, and the orchestral soundtrack of the game changes as you succeed or fail.  **The violins play a sad song after you allow the piano to make his solo** They are jealous.

2.  A text based on rails shooter: I recently played a very good on rails shooter game and figured it's a genre that has a lot of untapped potetial. By combining it with some ideas from this game, I realized that there's a possibility for an on rails shooter where you have to quickly choose the dialogue options that show up

3. A chaotic game of a thousand choices. Taking the idea of having a multitude of choices further than ever seen in any game before. You are in a room, and you have more than 1000 choices to make, but they are so many that some of them cover the ones you actually want to take. Figure your way around the choices you have available and open up better ones! Inspired by some ideas from https://rosden.itch.io/what-is-a-video-game and the aesthetics of the visual novel my fellow classmate Dan.

4. Also inspired by Dan's white room idea, a game where you are never really sure if you are actually moving through space or not. You change from one blank room to another, each one of them the narrator gives you an awesome description of a place. Is the game supposed to be empty and the imagery just imagined? What about this room that actually has stuff but the narrator described incorrectly?

5. An AI generated "Ball game" complete with all the abstractions and weirdness you expect from an AI doing so. What is a ball? What is a game? Fill the gaps and play a very surreal match of "ballgame". Inspired by me not knowing the baseball rules and being very surprised by how fun it was to play a make believe play in Butterfly Soup. A special touch is that all the artwork is also AI generated.

6. Finally the boldest of all the games, a game that plays with the idea of "you", "me" and "them". Who are "you" when the game refers to you as "me", or as "them"? What happens with your relationship with the main characters when the person of the pronoun changes? Is it really you playing? Is it myself playing with you? Are we... them? Make choices on the fate of the main characters: YOU, ME and THEM. Who dies horribly? Who is the anarchist? Who has a kid? Who choses to become a doctor?

And most incredible of all, everything in a single cohesive experience!

Hope you enjoy your reading.

Cool, and the description plays a good final touch, of course I didn't read it before playing lol 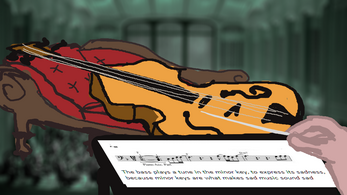 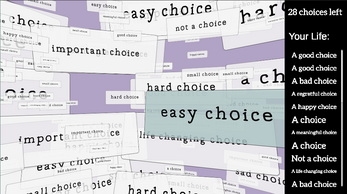